One morning in February I woke up to see an email from someone at the University of Copenhagen’s Faculty of Law inviting me to speak at a conference there titled “The Impact of the Nuclear Agreement with Iran,” to be held at the university in April.  The conference was sponsored by the university, the Carlsberg Foundation and another Danish organization.  The university would be kind enough to provide my airfare and accommodations.  Other speakers included a Danish sanctions lawyer (who would be my co-panelist), academics from Europe and beyond, the Danish Ambassador to Tehran, and the Iranian Ambassador to Denmark.  As I travel quite a bit, time in Washington is a precious commodity.  But this was hard to pass up.  Within days I decided I wanted to attend.  While I planned weeks in advance, I wound up getting my ticket less than a week before I left as my attendance was unclear until almost the last minute.  Why? U.S. sanctions on Iran. 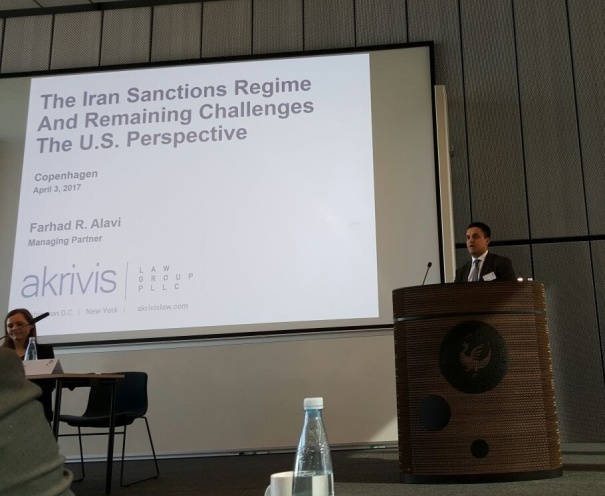 What do Iran sanctions have to do with speaking at a conference in Europe?  This is a particularly relevant question as there now, post nuclear-deal, many Iran-related symposia internationally.  What’s wrong with talking about Iran? Don’t U.S. persons talk to the media about Iran all the time?

One concern was that the conference was about Iran after the JCPOA but with a bit of what some may construe as a commercial angle.  Some Danish companies would be in attendance as they were interested to know about Iran’s business and political climate.  While US attorneys can advise foreign companies on sanctions with Iran, we cannot help them do business, meaning, we can’t advise them on how to circumvent sanctions.  This is at the crux of “facilitation.”  Even though I would just be talking about US law, my attendance and participation at this conference could be seen as helping facilitate the conference, which was not entirely but in part geared towards some aspects of Danish business related in Iran.

While that is a solid legal argument if I may so myself, OFAC’s issue was evidently something else, which I had also spotted. Iran’s Ambassador to Denmark was to also speak at the conference and potentially he and other Iranian Foreign Ministry personnel would be attending.  Talking in front of such people in the conference could be seen as a prohibited exportation of services to the Iranian Government (we can under certain limited circumstances obtain certain OFAC licenses to advise such entities on US sanctions laws). Even though my panel discussion would still be short and about the U.S. perspective on Iran post-sanctions, it could still be construed as a provision of a “service.”  Notably, § 560.554(b) of the Iranian Transactions and Sanctions Regulations (the “ITSR”) provides:

[T]he exportation, reexportation, sale, or supply of services directly related to the sponsorship by a U.S. person of a public conference or other similar public event in a third country that is attended by persons who are ordinarily resident in Iran, other than the Government of Iran, . . . is authorized, provided that attendance and participation at the conference or other similar public event is open for the public and that the conference or

Well, looks like the Government of Iran would be in attendance.  I therefore filed for a specific license. OFAC was exceptionally gracious and gave me one with ease, thankfully being very mindful of the imminent conference date. I went, spoke, and really enjoyed Denmark, its cultural offerings, and wonderful people. More on that in a later post.

But why is my experience important? For one, it again shows how far-reaching the sanctions regulations are, particularly for Iran deal supporters and critics who very wrongfully think all business between the US and Iran is now lawful.  Second, this is incredibly timely – think of all the conferences that have crept up around Europe, the United States, and the Middle East (including Iran) focused on Iran business– effectively “meet and greets” between people from within Iran and others outside, be they businessmen interested in doing a deal, or just simply to network. Now obviously, networking in and of itself is not necessarily a problem, neither is basic personal communication, but to attend and present at an Iran-focused forum where Iranian government officials would be in attendance is problematic.  This is not to mention facilitation, which could also be a major issue.

All this said, although OFAC does clearly not want U.S. persons to engage in unlawful commerce with Iran, it generally does maintain a favorable policy on people-to-people exchanges between the two countries.  This is likely why my license was issued.   My hope is that my experience helps illustrate to readers the far reach of U.S. sanctions laws on Iran, and the need to continue emphasizing compliance.

This website aims to provide notes and commentary on international legal, business, and political developments in economic and other sanctions. It is intended solely for information and entertainment purposes and should in no way be construed as legal advice. Laws, regulations, and policies change from time to time so some information on older posts can very easily be dated. If you have any questions or are unclear on any of the subject matters addressed or discussed on this site, please consult a licensed legal professional. Views presented in the comments and outside links do not necessarily reflect those of the website author. All external links on this website to articles and documents are external and provided for informational purposes only. They have no relation to the author of this website unless specified otherwise.


Quotations and linkages do not imply any type of endorsement.